In today’s world, online safety and privacy matter a lot. Anywhere, anyone can get hacked at any time, and their valuable data could be taken from them. Even some governments have a habit of spying on Internet users.

Alarming as this can be, most people still access the Internet without any means of protecting their privacy. Thankfully, technology is on your side. There is a way to protect your online self, and that is through apps called VPNs (Virtual Private Networks).

Going online shouldn't only be entertaining. You should also feel safe and sound. Protect yourself with the very best VPN service. Go online with the help of Express VPN.

There are quite several VPNs at your disposal, but for now, let’s deal with an ExpressVPN review. Express VPN is one of the top-rated VPNs available today. The service has a lot of features that make sure you’re basically hidden from view when you use the Internet. Also, it offers a great balance between security and speed, plus a host of other useful features.

For those who are curious, an Express VPN free version is not available. However, the company has a ‘Refer a Friend’ programme that could get you a ExpressVPN free subscription if can get a friend to sign up. You can’t get an ExpressVPN trial either. What they do offer is a 30-day money-back guarantee even for the 1-month plan. So if ever you did not like how the app performed, you can get your money back.

My opinion is even without Express VPN free subscription available, deciding to invest in it is something you’ll not lose sleep over. ExpressVPN price goes in three tiers, depending on how long you want to use their service:

With this, it’s a good idea to check what you need first before making the purchase. Let’s say you’re taking a 2-week trip abroad and just need the VPN for that time. In this scenario, the 1-month plan only is your best choice. However, if say, your job requires a good deal of online security, go for the highest-tier plan of 12 months.

Plus, all plans allow up to five devices to connect to the VPN. This is perfect if you have more than one gadget that connects to the Internet (it doesn’t run on smartwatches, though).

Using ExpressVPN for Netflix and Torrents

One great thing about ExpressVPN is that it bypasses the region-lock on Netflix. This means that you’ll be able to access all Netflix content anywhere you may be.

To do this, connect to an Express VPN server that is in the country where the content is available in. For example, you want to watch a US Netflix show. Just connect to a US server, and you’ll be able to access all US Netflix content wherever you are. Same goes for UK and Australia content.

Many an ExpressVPN review vouch that you can watch Netflix in HD. Buffering won’t be a problem either as ExpressVPN Netflix streams at high speed.

If you’re someone who downloads content and watches them offline, BitTorrent clients are your go-to tools. However, data privacy is especially a big concern in this case. But there is good news for you: ExpressVPN torrent downloading is a breeze, and it even keeps that activity hidden from prying eyes.

Plus, ExpressVPN download has no bandwidth limits, which means you get torrent download speeds as fast as possible. Also, no logs of any activity are kept, ensuring that your online footprint remains in the shadows.

This ExpressVPN review must tackle encryption capabilities. Express VPN uses a very high standard of encryption called 256-bit AES. In practical terms, this means the encryption is almost impossible to break. In turn, the data that you exchange online is guaranteed to remain private.

Also, Express VPN has an additional security feature known as perfect forward secrecy. This means the encryption code changes each time you log in. This way, your data becomes even harder to trace.

ExpressVPN uses a variety of protocols to secure your Internet data. By default, it chooses the appropriate protocol automatically, depending on your network. In most cases, the active protocol is termed OpenVPN UDP. This protocol provides an excellent balance between security and speed.

If you belong to the advanced user category, you can choose what protocol you’d like to be used in the app’s settings. There’s OpenVPN TCP, which makes your connection more stable due to its error-correction feature. A disadvantage, though, is that it slows down the speed of the connection.

Other protocols that it offers are IKEv2, PPTP, and L2TP (IPsec). IKEv2 is an alternative to networks that do not support OpenVPN UDP, and it has good speeds and security as well. PPTP and L2TP, however, are less secure protocols and should be used with caution. The VPN service does mention that in its options window too.

Express VPN has yet another security feature that ensures you stay hidden online. This is called Network Lock. It functions as a ‘kill switch’ that blocks all network traffic if the VPN gets disconnected. That way, your data stays secure, and your IP address is always hidden.

Express VPN also can be selective in the traffic that it encrypts. Through its split tunnelling function, you can choose which apps go through the VPN and which ones don’t. This is useful if you have apps that require maximum speed and bandwidth.

Although Express VPN has servers that span 94 countries, they are mainly based in the British Virgin Islands. This location has very stringent privacy protection laws, so everything that is on those servers is almost guaranteed to be safe from snoopers.

Using Express VPN is easy even for beginners. Even people who are not tech-savvy will find the interface very user-friendly. Once the app is open, the most prominent part of the screen will be a power button. Click on it to connect or disconnect: once it’s green, your device is connected to the VPN service. 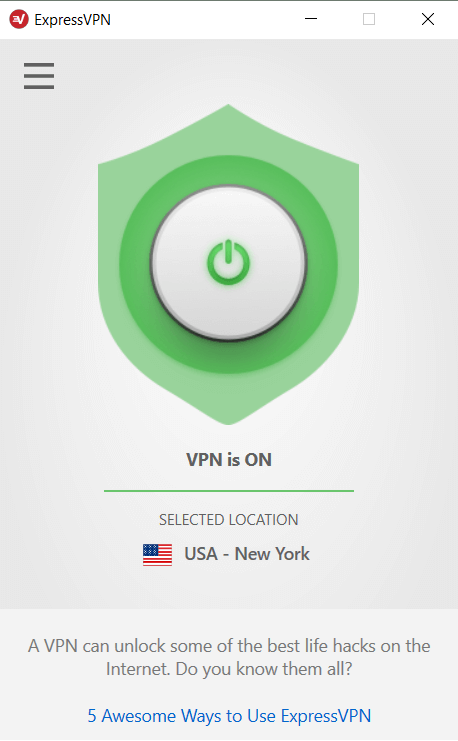 You can customise settings, too. You can also select different servers located in various countries depending on what you need. Once done, most of the security features will run automatically in the background.

Express VPN is available on a wide range of other platforms, including Mac, Linux, iOS, and Android. The mobile versions, however, do lack some key features like the automatic network lock. ExpressVPN also has a browser extension that allows you to access its features right from your web browser. With this, you don’t need to install a separate desktop app.

It even runs on some routers. ExpressVPN includes an app that can be installed on specific models of routers, like those from ASUS. Setting it up only requires a few steps.

Once installed, you can now connect several more devices to the router, and all of them will be protected with Express VPN. No need to install the app individually on each device. This way, you can bypass the five-device limit of the original subscription. Devices like the Chromecast and Apple TV can even connect through the VPN this way.

ExpressVPN router app also supports network lock, ensuring that all your devices stay protected in case of dropouts in the connection. Split tunnelling is also supported. This way, you can assign which devices will connect through the VPN.

Express VPN offers live 24/7 chat support on its website. Their live agents are usually quite helpful in resolving common issues, and they are responsive most of the time.

In case you don’t want to bother chatting with an agent, the website lists a lot of frequently asked questions (FAQ). Browsing through the FAQs section would answer most questions users may have about the VPN.

If you value your privacy and safety online, a VPN is a must. Of the many choices available, this ExpressVPN review says that the VPN is indeed a cut above the rest. It combines solid security features with great speeds. It also adds in a handful of extra features to ensure that your online activity is secured. The fact that it also supports routers is a bonus, as you only need to set it up in one device to protect all your other devices.

I am an online management expert and sharing my knowledge of 20 plus years to the industry is like community service. And it doesn’t get any better than that. Having lots of people coming in and letting you become part of their success is fulfilling. With the extensive knowledge I gained in the areas of online security and internet privacy, people can rely on the materials I provide for them.

My Review: How to Save Your Smartphone Photos With PhotoStick Mobile